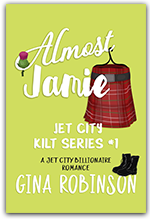 Half American, half English physician Blair Edwards has always wanted her Jamie, the Sinclair, the dashing Highland laird of the wildly popular TV series, Jamie. Unfortunately, it's so hard to find a man like him in the modern world. When the stars of Jamie come to Seattle's Jet City Comicon, Blair dresses up as Jamie's Elinor in a vibrant red gown, hoping to get a seat in their popular presentation and a good view of the handsome, charming star of the show. She doesn't expect to be called on to use her medical skills to treat an injured cosplayer who looks almost like…Jamie. And sets her wounded heart racing.

Cosplayer, geek, app designer, and cybersecurity expert Austin MacDougall has been styled by his matchmaker to look like the actor who plays Jamie. He's been trying to win the prize for best amateur cosplayer for years. Against the advice of his friends, he goes to Jet City Comicon in a kilt as Jamie, the striking redheaded Highlander. When he's injured during a mock battle with a vicious cosplaying orc, his friends get him help from a beautiful doctor in a stunning red dress.

Has Austin met his Elinor? The adventure is just beginning…

Find out why readers love Gina Robinson's good guy heroes, the strong women they fall for, and their funny, witty, romantic stories.

Although the Almost and Simply books can be read out of order, for the most reading enjoyment, read the Almost books first, followed by the Simply books.

The two Almost books must be read in order:

The two Simply books must be read in order: 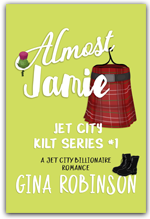 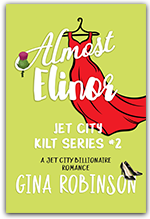 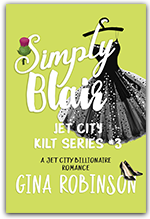 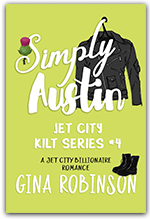